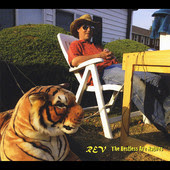 Buffalo based REV, - Al Kryszak - guitar, keyboards, Mike Brydalski - percussion, Rob Mazurkiewicz - bass, have been creating bright and brainy prog minded post-punk rock music out of the recording studio attic of Kryszak's home since 2000. Their third album, the self-released The Restless Are Natives, is straight up modern rock serving as a template to dazzling excursions into  Euro-folk-psych balladry, shoe-gazey electronica and David Byrne rock-and-mull contemplation.

Paving the way with unexpected, but never jaunting turns in the road, is a primal mystical theme of American indigenous culture rising through the music like a moon casting a pale light over a howling wolf. Guitars wail away to an infinite and diminishing point as if vainly struggling against a wind, and tom-tom percussion lowers and taunts the barometric soundscape to a certain downpour of rain wind and hail.

"Hail" is indeed, track 8. It recalls pre-pop Fleetwood Mac Bare Trees era cerebral prog with its rainy day guitars and druggy Astral Weeks philosophical gaze as a hailstorm threatens the narrative's very being - Is it cracking on you, the thunder that you feel? ... Is it coming down? It's a striking and mind numbingly upright song.

Mystery Beat, is the defining sound in shoe-gaze psych - a term used to describe 90s post-punk bands with a penchant for dreamy, luscious trance-like musical passages - as disembodied harmonic vocals drift aimlessly about, tinkering acoustic guitar glitters like a hallucinogenic diamond over a dance floor, and a chug-chug maraca beat battles with anchoring guitar for closure. It will find you staring at your shoes as if contemplating mysterious ancient script.

Opener Played, could well serve as the first single although my choice would be the dreamy Mystery Beat. It's a driving rocker with aggressive guitar and catchy anguished-artist-in-anticipation lyrics - I stand in line with you, I sleep on the floor past visiting hours -. Rhythmic time signature guitar adds a pent up anger to this passive-aggressive sentiment.

Angelfish is another catchy radio friendly song with plenty of accommodating guitar, in which the singer is - in the tank with the angelfish - who are not rocking in the free world.  She's In Your Blind Spot merges late '60s Byrds-Buffalo Springfield folk rock with acoustic Euro balladry in a lovely song that lingers like a forgotten early '70s Jethro Tull track.

The Restless Are Natives offers several avenues to rock and shoe-gaze by. It's appeal only grows with each listen as even the slightest rocker evolves to a depth of evolving imagery. Composer, lyricist Kryszak isn't satisfied with writing a modern rock hit single, which he is certainly capable of. His songs strive to break the barrier between digestible pop music and true exploration of the psyche.
Posted by Author at 6:30 PM